This is going to be a pic heavy post. But if you don’t want to look at the whole post…

I enjoyed myself. I didn’t care for the 34 degree start temps, but the race went much better then the Fit 4 Life 10K race that I did by the same director. 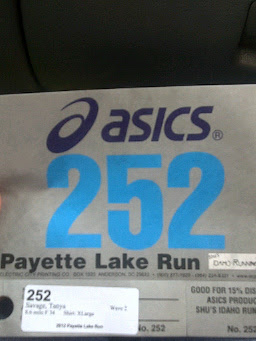 Packet pick up was fine. In line for a few minutes,  but we were able to pick up our timing chips when we got our bibs! Much better then the hassle of in the way of the half marathoners at the Fit for Life. We got a long sleeved shirt, and the same swag as the Fit for life race.

After packet pickup, I had to eat. We had munchies on the drive up to McCall, but not enough to make up for a Chobani for breakfast. I needed dinner. Salmon River Brewing saved the day with good beer and ok dinner. 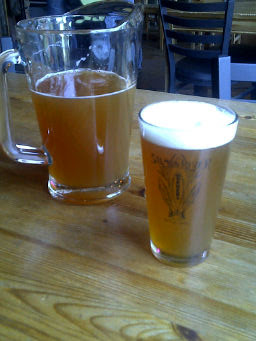 P.F.D. Pale Ale was awesome. Totally wanted a growler of this but didn’t know if it would fit in the hotel fridge. 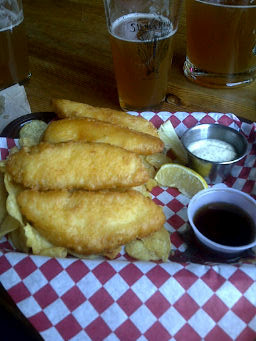 I had Fish and Chips. 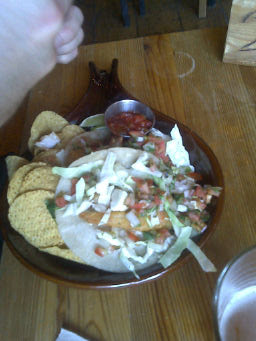 The BF had Baja Fish Tacos. Both were ok. 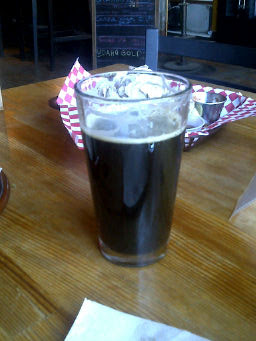 Buzz Buzz coffee porter really tasted and smelled like cold coffee! One of the first coffee beers that actually was made as it should have! 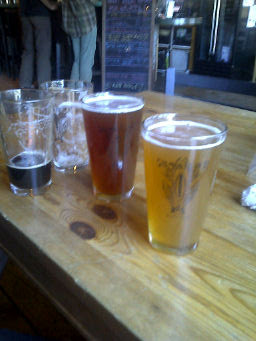 The amber beer above was the Shiver IPA. A little on the hoppy side, so one was enough for us. The lighter beer was the One Eyed Pumpkin People Eater which had a pumpkin spice aroma and a mild flavor. This was my fave of the long weekend of beer tastings. 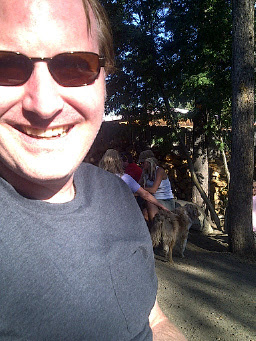 We went to the back of the joint and there was Finn Riggins playing. I am not a huge fan, we have seen them before, but appreciated the drummers skills. He totally carries the band. After a few songs, we left. The girl in the band has cankles. 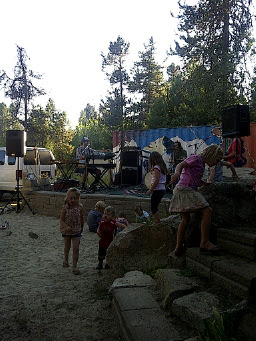 I needed to walk around. I kinda wanted to do a shake out run, but after dinner and plenty of beers, a walk around the lake was good enough. 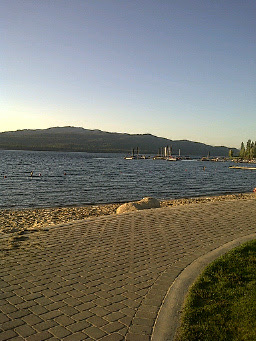 We went back and decided to break out my post-race wine and hop in the hot tub. I may have drank a little much, but I made sure to have plenty of electrolytes and water. 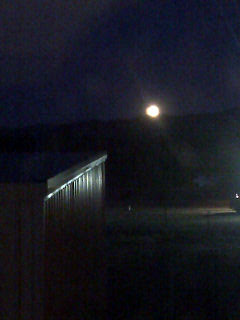 Our room had a cruddy view, but we did get to catch the moon rise over the mountain before bed and the sun rise in the morning.

I happened to wake up at 2:30am, which is my usual bedtime. I fell asleep by 10:30pm. I couldn’t go back to sleep for anything! The BF woke up and we both we pretty cruddy feeling from the lack of sleep. I expected to be up by 5:30am, but I just couldn’t go back to sleep! Not the ideal way to start race day. I had a Chobani and went downstairs to the hotel breakfast. A bite of eggs and a couple bites of Raisin Bran and half a coffee was all I could get down. I felt like a groggy mess. I wasn’t hungover feeling, but that lack of sleep feeling was miserable.

The start of the 18 mile race around the lake was at 8am. We got down there about 7:30 and waited in the car. I brought a Lemon Hydro and sipped that and felt a little more awake. That and the 34 degrees really jolted me awake. I decided to put on my calf sleeves and a long sleeved over my tank top for the hour wait outside for my race start. 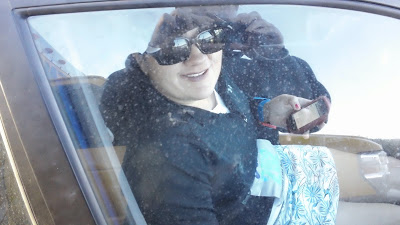 Warm in the car! 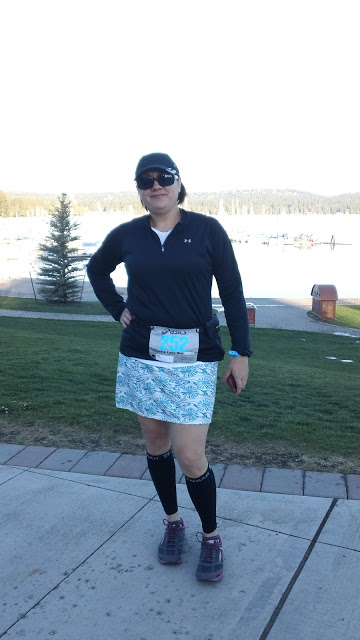 Posing in the cold before walking to watch the start of the 18milers.

I had to take a bus with the 5K’ers to the start of the race. The bus ride was a little squished. I was one of a few people that had to squeeze into a seat with 2 others. 3 adults don’t fit into bus seats like when we were kids! But the bus sure warmed us up and we were at our start line around 8:40. 20 minutes in the cold was unpleasant. I jogged in place to keep warm. What is funny is that I don’t think many people jogged to warm up. 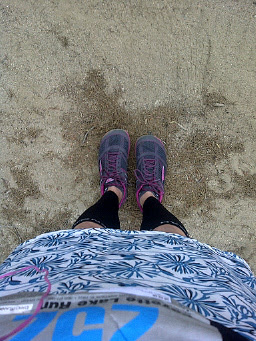 Before we started 2 of the 18milers zoomed passed our start. Wow, I mean they had to have been 5-6 minute milers. They were speedy. It would have been nice to start out a little early, but the wait wasn’t so bad. The race started right on time. As soon as I hit start on my Garmin, I watched my watch switch right from 8:59 to 9:00. I was pretty cold on the first mile. It took until the 2nd mile to where I could feel my feet. They were so cold they were numb! I didn’t take any pics except one. I was focusing on the rocks and ruts in the road. And keeping an eye on the runners around me.

The route was part rocky gravel dirt road, and part paved road. I thought the road was pretty well marked. 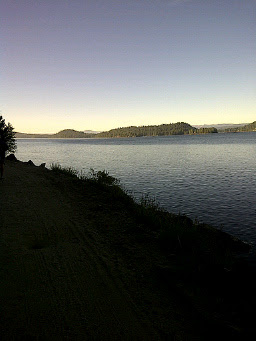 This was part of my race view. It took a few miles to get into the groove of running. I had my long sleeve on that I took off at mile 2 and put it around my waist. Then I was fumbling with my ipod and actually stuck it under my garmin strap. It worked out pretty well.
I took an Accel Vanilla gel at mile 4.75, I noticed people on the side of the road and thought it was a water stop, so I took the gel. But it was not water, it was a family with little kids cheering us on. We got to high 5 all the kids and it was pretty fun. It was another mile or so until I could ditch my empty gel packet and get some water to wash it down. Thank goodness the Accels are so liquid that I didn’t feel sticky or sick feeling.
My form was total crap on the run. I have been focusing on my form with the Altras but on this race, I really didn’t unless it was on the upillls, where it is easier for my to step up with the ball of the feet and propel uphill. I was plodding past some people uphill, and I was shocked that I was able to do that because some people seem like faster runners then me. I did stop to walk the water stops and 2 short spans of uphill trotting. I felt tired about mile 5. My quad was acting like it was going to cramp up and I felt like I was going to have no energy at the finish line, like I was going to puke or lay down, but those cruddy feelings didn’t last long. I was able to stay passed some people I was able to pick off and right at the end of the race, I was passed by a couple of ladies I was able to pass at one of the previous water stops. Just before that, I was passed by some lady that I didn’t let pass me. I put that last stretch of run into another gear and made sure she didn’t get passed me at the finish line. The BF was shocked that I was going so fast, he almost spilled his coffee to video me. 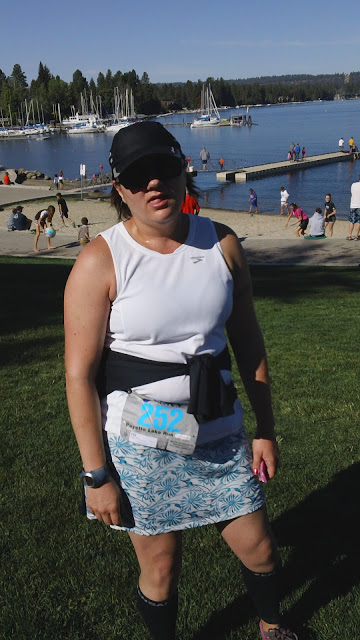 I had to look pretty tired at the finish.  I actually felt pretty good! 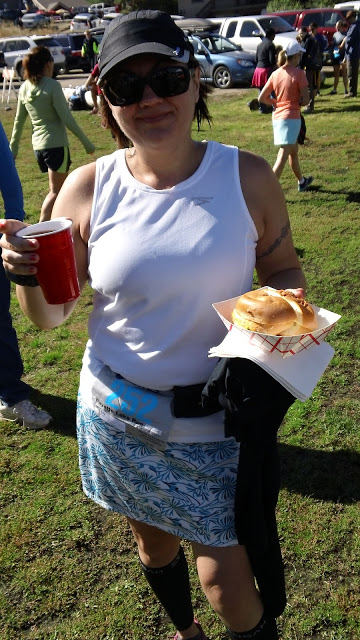 PBR & Salmon River Shiver IPA at the finish! Plus sub sandwiches and chocolate milk at the finish. Look who is happy! 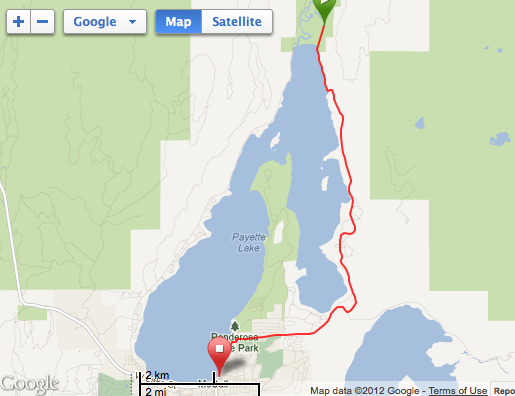 After 2 beers and some sandwich, I put my leggies into the lake. It was the perfect temp and so clear, I had a hard time leaving. I would do this race again!