I took lots of pics during the race, so be warned.

I didn’t go into the race prepared at all. My last long run was the beginning of March and that was a greenbelt 10miler. All the runs that I had in March and April were 1-3 miles a couple times a week if I was lucky. There were no real training in the Foothills, no stair climbs at the gym, no squats in my living room. I had some bike rides for some bike commuting here and there, but nothing of any real substance.

2 days before the race, I upped my water intake. And I started getting worried about being late for the NOON race start. Just random anxiety that I couldn’t shut up. I wanted to focus on hydration and light eating the day/night before, but things kinda got a little screwy. I ate somewhat OK – Pho Tam for dinner and tried to drink a good amount of water during the day.

But I had a bad case of nerves and just wanted to not even go to the race. I felt too big and heavy and bloated and slow to be a part of Team Beef. I didn’t want to be confused with the cow aspect of the beef, so there were tears and a tad bit of depression for the most of the day.

That lavender supplement really did calm my mind. It wore off by the time I was trying to unwind before bed so I was a little keyed up and had a really hard time sleeping. My tummy had unusual late night “nerves,” too.

The new boy forced me out of bed at 9am. There were still nerves. As soon as I got up, it was potty time. I didn’t even get to TURN ON my coffee pot so it wasn’t the coffee hitting my gut. I usually don’t #2 so many times before a race, but I did 3 times before I left the house at 11am. All I could force down pre-race was a bit of Powerade, cup of coffee, and a piece of Ezekiel bread with PB.

Getting to the race was hassle-free. I didn’t do much in the way of warm-ups other then walking around, getting my bib, walking to the car to get more sunscreen. I pottied a half hour before the start and could have done it one more time before, but was too lazy to get back into that potty line.

I ran the first 3 miles and it was UPHILL INTO THE WIND. Ugh. I hate the wind. Hills are hard enough, but into the wind?! WTF!? But mentally, I was calm and no pressure.

It felt freaking awesome to be part of a race. I have MISSED the racing aspect the last few months and really felt good to be running.

Whatever depression or tears or fatness I felt the last couple days/months was gone. 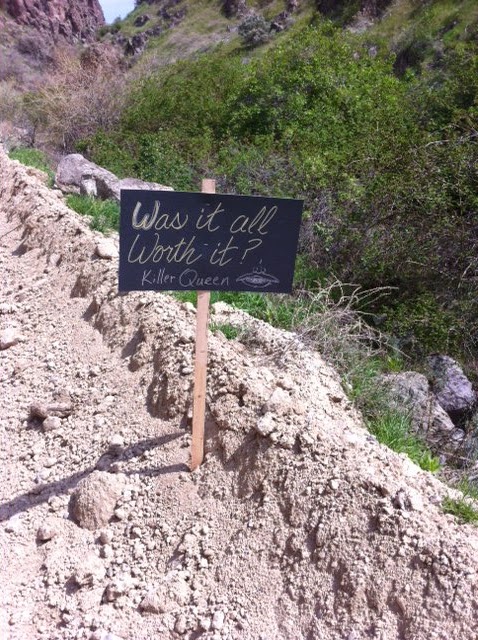 Mile 4 my quads were screaming. I KNOW that they were not going to be happy at the end of the race. Crap. I was starting to fear the end of race quad burnout. 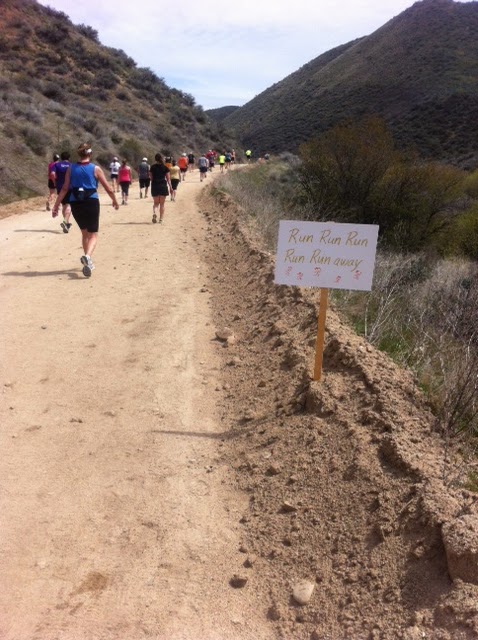 But what I found weird during these middle miles was there there were what felt like long periods of time where no one was talking.

No one said anything to anyone. Nobody said anything. There were only footsteps and the little creek of water sounds on the trail. It was so strange. It was like, mile 4-7.

I did have someone comment on my skirt around mile 5-6 but it felt so odd to me that it was so quiet otherwise. I wanted to chat to people as I passed but figured that I would save my breath and continue my hill climb. I’m sure that is what everyone else was doing.

I walked most of miles 4-9. I didn’t really care about pace, didn’t even look at mile pace on my runtastic iphone app.

My leggies were hurting though. I could feel the screaming in the calves, hammies, and quads. Every step they were begging me to stop. And the faster I tried to go, the louder they told me “No.” Eh, eff it. I’ll walk then.

I felt there were more water stations this year? And more “encouraging” signage along the course? Maybe because I was going slower and tried to take pics to share them with you all, which I am doing in this post. Anyways, I had water at all the stops and a gel at mile 6.

My tummy wasn’t acting like it made out of cast iron as in the last couple of years. I felt some slight sloshing here and there and at mile 10 it was like, yeah, not happy. There were some slight side stitches here and there. I was alternating my run/walks and the walks helped the gut crankies.

I usually don’t take anything from “temptation station” but this year I had a Doritos chip.  I wanted a cookie but figured this was salt an I was SO gritty and salty, I thought that this was for the best.

My body was feeling the lack of training. As soon as I took the first downhill strides, my right foot wanted to cramp. F-you foot.

This downhill is the BEST part of the race. The cooling shade of the trees, gravity is pulling you down the hill, it is a sigh of relief from the serious uphill grind. I slowed my roll and tried to keep as steady of a pace for as long as I could. 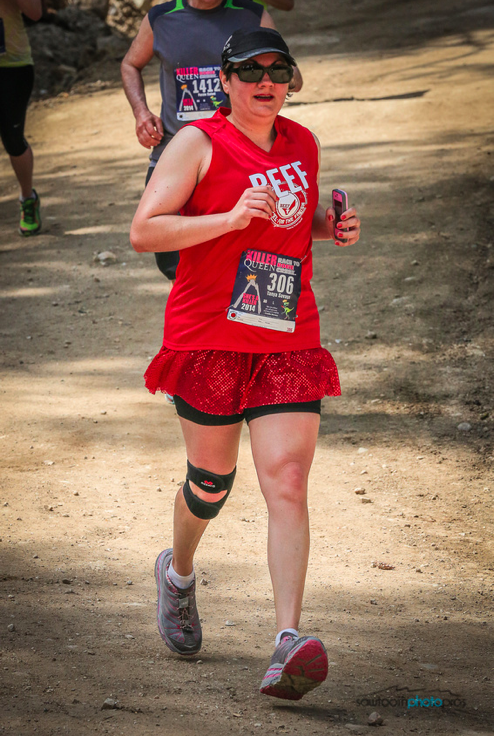 I took waaaay more walk breaks on miles 9-12 then I should have. Last year was the cause of a side stitch that made me walk at this point of the race and, well, this year is for sure a different beasty. One walk break last year compared to how many this year? !

I was out of energy and my mind was gone. My quads were letting me know that they hated me. 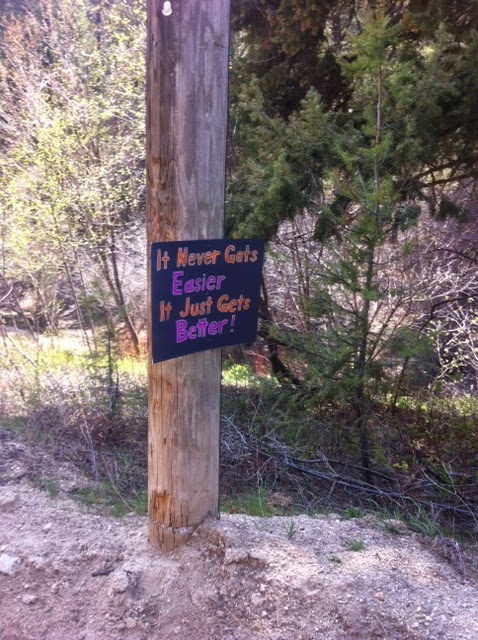 I couldn’t even pose for any of the cameras on the course. (was there more people taking pics this year then the last couple of years?) I was toast.

I loved that this years finisher swag was a patch of the “Robie Queen” logo. I don’t know where I am going to stick it, though.

And that this year the finishers shirts are tech fabric! Squee! The last 2 years were cotton and in typical RunInBoise snobbery, I won’t wear cotton race shirts. Thankfully, this years shirts are tech and I WILL be keeping it and wearing it. I actually wore it on a very slow and painful shake out run on Monday. Collar is too high and chokey and the sleeves too long but nothing a pair of scissors won’t fix!

Chicken A’la “Queen” at the finish and I had one beer- Mirror Pond. New boy doesn’t drink so no beer for him.

My leggies were so shaky at the end when I took of my shoes and switched to Tevas. I felt like my legs were beaten with baseball bats the 2 days after.

I was exhausted. The new boy and I went to the Riverside for dinner afterwards because we have not been there since the remodel. It sadly wasn’t worth the money. But I was rungry. I don’t recommend it to the locals. For the price, I figured it would be a little bit more fancy because of the fancy price but it’s just a cheap diner meal.

Anyways, I finished. It wasn’t pretty. But it was what I needed to get out of my non-running funk. Even the new boy was showing interest in running next year…

Did you race this weekend? Any other races coming up soon?